One needs to know some basic properties of the given compound and its Lewis structure to understand its molecular geometry, polarity, and other such properties. SF4 is a chemical formula for Sulfur Tetrafluoride. It is a colorless corrosive gas that is used in the synthesis of several organofluorine compounds. SF4 is a rather hazardous compound but is used widely in chemical and pharmaceutical companies.

To understand this molecule’s properties, such as its reactivity, polarity, and more, one needs to know the SF4 Lewis structure first.

Molecules having a molecular formula of AX4E have trigonal bipyramidal molecular geometry. Here two fluorine atoms forming bonds with the sulfur atom are on the equatorial positions, and the rest two are on the axial positions. As there is one lone pair on the central atom, it repels the bonding pair of electrons, which tweaks the shape a little bit and makes it appear like a see-saw. The electrons follow this pattern of arrangement following the VSEPR rule to minimize the repulsion forces between the lone pairs of electrons to maximize the molecule’s stability. And to draw the Lewis structure of SF4, we first need to know the total number of valence electrons in this molecule.

( as there are four fluorine atoms, we have to consider valence electrons of all atoms) 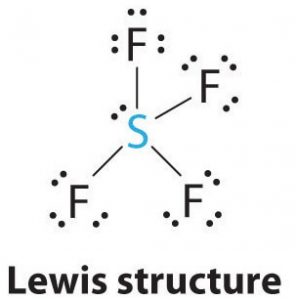 Now that we know the total number of valence electrons, it would become easy for us to understand the bond formation between the atoms and the complete arrangement of the molecule too.

Hence, the central atom, sulfur, will have one lone pair of electrons and four bonding pairs of electrons in the Lewis structure of SF4. At the same time, each fluorine atom will have three lone pairs.

Once we know the Lewis structure and molecular geometry of the given compound, it becomes easier to depict the molecule’s polarity. Here, one lone pair on the central sulfur atom and four bonding pairs of electrons leads to the asymmetric distribution of electrons on the central atom.

Also, as the shape of the molecule is like a see-saw, two fluorine atoms can cancel out each other’s dipole moment, but the rest two can’t due to the electrons’ arrangement. And as fluorine atoms are more electronegative than the sulfur atom, it results in uneven distribution of the charge. Hence the dipole moment is not canceled, which makes the molecule polar. So yes, SF4 is polar. To know the hybridization of the SF4 molecule, let us first look at the regions of electron density for the central atom.

Sulfur has four bonding pairs of electrons and one lone pair, making its total number of regions for electron density 5. Hence the sulfur atom uses five hybridized orbitals, one 3s orbital, three 3p orbitals, and one 3d orbital. This arrangement of electrons around the atom and hybridized orbitals leads to the sp3d hybridization. One can also use the steric number to know the hybridization; here, the steric number is 5 for the sulfur atom.

The central sulfur atom forms four bonds with the neighboring fluorine atoms and has one lone pair of electrons. Fluorine atoms on the equatorial positions have the bond angles of 102 degrees, and the axial ones have 173 degrees, which are a little different than the trigonal bipyramidal molecular geometry leading to a see-saw shape. To conclude all the properties we can say that,