PBr3 is a chemical formula for Phosphorus Tribromide. The molecule is made up of one Phosphorus atom and three Bromine atoms. It is a colourless liquid with a pungent odour. Like PF3 and PCl3, PBr3 also exhibits the properties of both Lewis Acid and Lewis Base.

PBr3 is used in many reactions with alcohol to replace the OH functional group with Bromine atoms. This reaction produces alkyl bromides and is also referred to as a substitution reaction. Phosphorus Tribromide is also used to convert carboxylic acids to acyl bromides. The molecule starts fumes when it comes in contact with moist air due to hydrolysis.

In this blog post, we will learn about the molecule’s Lewis Structure followed by its molecular shape, polarity and more to understand its chemical properties better.

To understand the Lewis structure of any given molecule, we first need to know the total number of valence electrons to determine the arrangement of atoms in the structure.

Phosphorus has five electrons in its outer shell.

Each bromine atom has seven valence electrons, but as there are three atoms of Bromine here, we multiply the number by 3.

There are 26 valence electrons for Phosphorus Tribromide.

To draw the Lewis structure of an atom, we need to know the following details:

Here we already know that there are 26 valence electrons for PBr3.

All the bromine atoms will be arranged around the central atom-like shown in the figure below:

For drawing a Lewis structure, we always first try and complete the octets of the atoms placed around the central atom. The octet rule says that the atoms with eight valence electrons in their outer shell attain a stable structure.

Here we will first try and complete octets of all Bromine atoms, as each Bromine

atom only requires one valence electron to complete its octet.

Now, if you notice, forming these bonds will complete the octets of Bromine as well as phosphorus atoms. As both these atoms now have complete octets. Place other valence electrons around all the atoms, and here you have the Lewis Structure of PBr3.

There is one lone pair of electrons on the central atom and three sigma bonds in the PBr3 Lewis Structure. 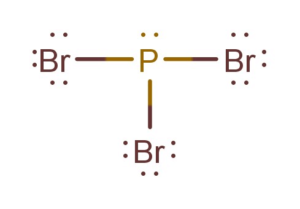 To find out the Hybridization of the given molecule, we always look at the number of hybridized orbitals formed for the bonds formed as well as the lone pairs of the molecule. As mentioned above, there are three bonding pairs and one nonbonding or lone pair of electrons in Phosphorus Tribromide.

Hence, PBr3 has sp3 Hybridization where there is one s and three p hybrid orbitals formed.

The Lewis structure of the molecules helps us understand the arrangement of atoms in the molecule. However, it has some limitations as well. We can’t really depict the molecule’s structure in 3D, and that is where the molecular geometry helps us.

Here in PBr3, there are three bonding pairs of electrons and one lone pair of electrons. The molecule will adopt a geometry to minimize the repulsive forces. Using the AXN Notation method, we can find out the molecular geometry of the molecule.

For PBr3, the central atom is Phosphorus, three bromine atoms form bonds with it, and there is one lone pair of electrons. Hence it has AX3N1 notation, and referring to the table below, we can say that it has tetrahedral geometry.

Generally, the molecules with tetrahedral electron geometry and one central atom forming bonds with three atoms have bond angles of 109.5°. However, here, the arrangement of atoms is asymmetrical, and there is a lone pair of electrons on the central atom; the bond angle will not be precisely the same, but it will be around 109.5°.

The above-mentioned AXN Notation method also helps us find the molecular shape, and for PBr3, as it has AX3N1 notation, it has a trigonal pyramidal shape.

Generally, the molecules with an asymmetric shape are polar in nature due to the uneven distribution of charges. But to confirm it, we will look at the polarity of this molecule.

Thus, PBr3 or Phosphorus Tribromide is a polar molecule.

To summarize this blog post on PBr3, we can conclude the following: