It is a weak acid and exists only in specific conditions, i.e., in solution (cold and dilute), as a gas, or in the form of nitrite salts. It appears to be pale blue as a solution. Its existence in these peculiar states is due to the fact that HNO2 is unstable and decomposes rapidly in its free form.

Nitrous acid decomposes into Nitric Oxide (NO) and Nitric Acid (HNO3) at elevated temperatures. Again, due to its unstable nature, it can react as either an oxidizing or reducing agent. One of the more prominent Nitrites (salts of Nitrous acid) is NaNO2 (Sodium Nitrite). It is mainly used as a preservative in the processed meats industry.

It has the following properties:

Each atom in the molecule contributes valence electrons from their outermost shells. We can use these electrons to form the Lewis structure for Nitrous Acid.

Nitrogen is in group 5 of the periodic table with the electronic configuration 1s22s22p3.Therefore, the lone Nitrogen atom contributes 5 x 1 = 5 valence electrons.

Thus, the total number of valence electrons in Nitrous Acid [HNO2] is given by:

The Lewis structure of a compound represents a graphic arrangement of constituent atoms present in a molecule mixture. It tells us about bond nature, molecular geometry and hybridization among other properties.

Whenever there’s a Hydrogen atom attached to a polyatomic ion, we can safely say that it is an acid. Here, Nitrogen will act as the central atom, and Hydrogen will be placed at the end, adjacent to one of the Oxygen atoms. This arrangement is shown in the skeleton structure below.

Two valence electrons are placed between each of the atoms in the compound, and covalent bonds are formed.

It can be observed that the octet conditions for Oxygen and Hydrogen are met. However, Nitrogen still needs two more electrons to fulfill the octet rule. This can be done by moving over two valence electrons from an adjacent Oxygen atom to form a double bond with the Nitrogen atom. This makes the structure more stable and fulfills the octet rule for all the constituent atoms as well.

To verify the arrangement shown above, we can calculate the formal charges.

The formal charges being 0 for all of the atoms in the HNO2 molecule tells us that the electron arrangement shown above is stable.

Therefore, the Lewis Structure for the HNO2 is represented as follows:

To determine the hybridization of Nitrous acid (HNO2), we first determine the number of electrons domains. Lone pairs and covalent bonds with other atoms contribute to being electron domains.

Therefore, in this case, there are three covalent bonds present. This gives us an sp2 hybridization state.

Nitrous Acid (HNO2) has a hybridization of sp2.

According to the VSEPR theory, the atoms will repel each other in the presence of lone pairs and electrons, giving rise to a bond angle of 120°.

To determine the molecular geometry of Nitrous acid, we must first observe its Lewis structure once more. There are three covalent bonds present, with the Hydrogen atom being on the outermost end. There is also a lone pair attached to the Nitrogen atom.

The electron clouds over these atoms will repel each other, pushing the Oxygen atoms downwards. This gives it a bent shape.

To verify this, we can use the A-X-N method.

‘A’ represents the central atom Nitrogen. Therefore, ‘A’ = 1.

Therefore, that would give us AX2N for the HNO2 molecule.

From the A-X-N table below, we can determine the molecular geometry for HNO2.

From the above table, it can be observed that an AX2N arrangement corresponds to a Bent Molecular geometry.

To determine the polarity of the HNO2, we must first account for its properties. These include its electronegativity, its molecular geometry, and its resulting dipole moment if any.

Let’s consider the molecular geometry of HNO2 already discussed above. There are two Oxygen atoms bonded to the central Nitrogen atom. There is also a Hydrogen atom present. This OH group resides on one end of the molecule, giving it its bent shape.

Therefore, the HNO2 molecule is asymmetric. This leads to an unequal distribution of valence electrons. 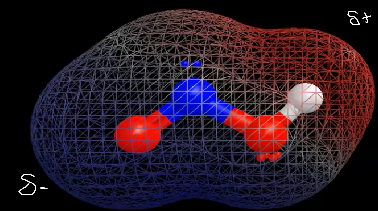 Therefore, due to its asymmetrical shape, there is an unequal sharing of valence electrons. This, combined with the significant difference between the two ends of the molecule represented above, proves that Nitrous acid (HNO2) is a polar molecule.